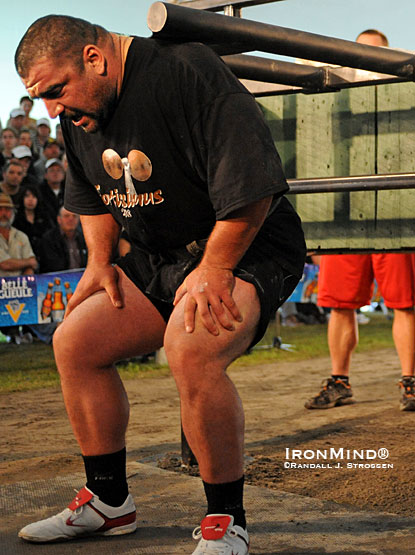 Strongman Champions League (SCL) is set for this weekend’s contest in Serbia—home of Ervin Katona.  Here, he is shown competing at Fortissimus in 2008, where a strongman fan attending her first live contest told IronMind®’s Randall Strossen that Ervin Katona was her favorite competitor.  IronMind® | Randall J. Strossen photo.


“The field will be not so strong as usual,” SCL cofounder Marcel Mostert told IronMind®, “because we are just a few weeks before World’s Strongest Man [WSM], and a lot of guys want to give their best there.

“We are very proud that our top 10 were invited to WSM this year,” said Mostert.  “It’s a result of good cooperation with Colin Bryce and Giants Live.”

And the real beneficiary of this cooperation is strongman, overall, as it assures a first-rate field of athletes.  Addressing this point, Mostert said, “I’m totally convinced that the best 30 athletes will be in Sun City this year,” referring to the 2010 MET-Rx WSM venue.

“In Serbia, of course Ervin Katona will be there in his home country, along with other names like Agris Kazelniks and Simon Sulaiman.  But also we will have complete new names there, like Gery Schiel from Austria and Akos Nagy from Hungary.”

“It will be a nice competition in 30-degree (86 F) heat!," Mostert said, adding that admission is free.