No stage is too big for Strongman Champions League (SCL), and later this week, SCL will host the first French national championships in Paris, along with world record attempts by Zydrunas Savickas. 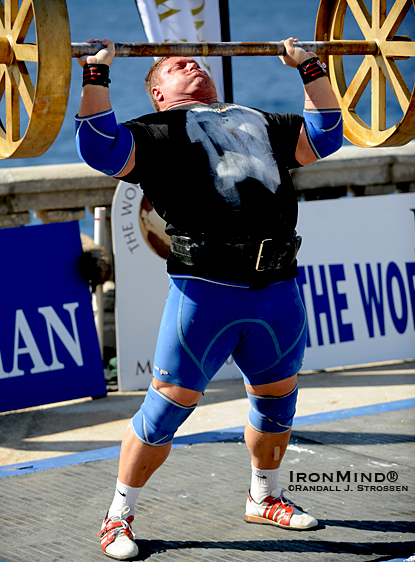 If you are strong enough, you just press it: That’s how reigning World’s Strongest Man winner Zydrunas Savickas handles world record poundages on overhead lifts such as the Apollon’s Wheels . . . he just presses them.  IronMind® | Randall J. Strossen photo.


Staged at the biggest French fitness expo, France’s Strongest Man will debut in Paris this weekend and for some added spice, “Zydrunas Savickas will be there to try to break three world records,” SCL cofounder Marcel Mostert told IronMind®.

Mostert put Zydrunas Savickas’s upcoming performance in perspective by saying, “He will set a new standard on a few events [and then] all other strongman in the world can try to break them.  The French Nationals will be done over three days, from Friday until Sunday, and Zydrunas will have each day a world record attempt.  It will be a great competition with a spectacular light show.”