Time was that you went to Bulgaria if you wanted to see the best weightlifters in the world, and you went to Finland if you wanted to see the best strongmen in the world, but those rigid distinctions have faded into the past and now the Strongman Champions League, with its strong Finnish connections, is bringing some of the world's top strongmen to Bulgaria. 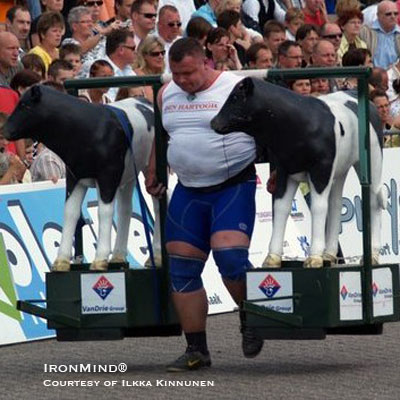 Agris Kazelniks is among the strongmen featured in the next Strongman Champions League competition. Marcel Mostert has likened the Strongman Champions League to a train roaring down the tracks - hop on if you're up to it, he says to competitors, and if you are a strongman fan, Mostert says that you will love the top performances. IronMind® | Photo courtesy of Ilkka Kinnunen.

Strongman Champions League co-founder Ilkka Kinnunen told IronMind® that, "The competition is organized by BFSA (Bulgarian Federation of Strength Athletes)," and it is building on last year's successes.

"Last year there were over 4,000 people watching the competition, and this year the interest has been even bigger, so we are expecting 5,000 - 6,000 people," said Miron Jordanovic, the BFSA chairman.

This contest is set for June 21, in Sofia, Bulgaria. Stay tuned for more details.