Just in case you think that everyone who gets lung cancer is a two-pack-day smoker who deserved what he got, William 'Fullsterkur' Crawford, M.D. told us otherwise when we asked him to explain what motivated him to organize Stone Lifters For Cures - which will be holding a benefit for the American Lung Assocation this weekend. 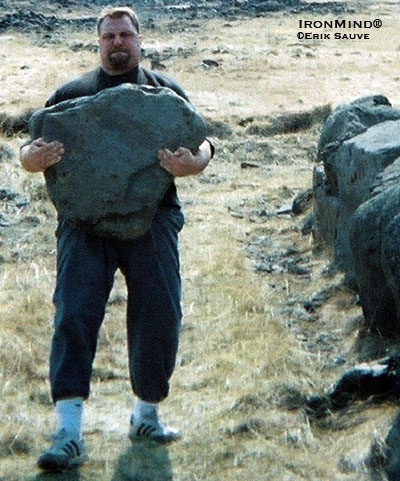 Already "an Ivy League-educated M.D.," Bill Crawford earned his stripes of another kind when he gained fullsterkur status on the actual Husafell Stone, in its original Icelandic setting. Continuing his march forward, Bill has organized a fund raiser at the New Hampshire State Capitol this Saturday.  IronMind® | Eric Sauve photo.

"I organized this event in the memory of my brother-in-law who died last year, a 45-year-old non-smoker," Bill said. "He died of lung cancer and about 10% of those who die from primary lung cancer are non-smokers. The American Lung Association is dedicated to promoting lung health as many long term and fatal lung illnesses are preventable. Funding for lung cancer research is low because the general consensus is that smokers are the only victims so why put energy into research?  Well, we know that non-smokers are susceptible as well."

"This event is a small way to make sense of tragedy. My sister Anita will be coming from North Carolina to help promote the event which will be held at the very steps of the State Capitol here in Concord. The benefit is called Stone Lifters for Cures and [you can access] the website for donations."

"Steve Slater of Slater Stones donated a mold for me make several stones in the 225- to 250-lb. range for the event." Steve Jeck also donated signed copies of his inspirational book The Stone Lifter to give to participants. "We have mobilized for an event to benefit a great cause. The greater story is that we stonelifters, The Strong for Good, will use our passion for stonelifting to benefit others."