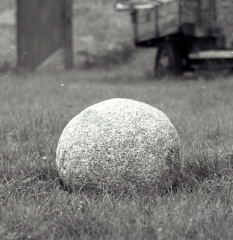 Steve Jeck might not have realized it at the time, and we certainly didn't, but he was about to stir things up in the strength world. Steve wrote us a wonderful letter very nicely telling us that he loved MILO, was happy we didn't feel politically compelled to edit out Christian messages, and that SUPER SQUATS and our No. 2 Captains of Crush® gripper had contributed to what he had just succeeded in doing: Steve had gone to Scotland and lifted the Inver Stone.

By golly, other men had lifted the Inver Stone, but nobody before or since Steve ever created a tiny fraction of the interest his effort generated. Soon, our MILO team had to follow suit - we went to Scotland, met Nordie, and I had the chance to alternately be humbled by and then succeed in lofting this piece of history, and since then, countless other people have also made the trek. We hung the nickname "Inver Stone" on Steve, but his impact went far beyond just boosting the prominence of this great stone, because Steve was a mighty contributor to the broader field of stone lifting as a significant pastime and enduring challenge.

Steve Jeck is one of our special friends, our resident strength philosopher whose pearls help light up MILO, and we admire him not just for his feats of strength, but also for how he conducts himself and for the example we feel he sets for other people.

And now, with a drum roll, please, we are proud to announce that Steve "Inver Stone" Jeck, co-author of the book Of Stones and Strength and star of the DVD Kviahellan: The Pen Slab, has a new role at IronMind®, as we begin featuring his monthly column, "From The Quarry."

Read, enjoy, contemplate and benefit from it.