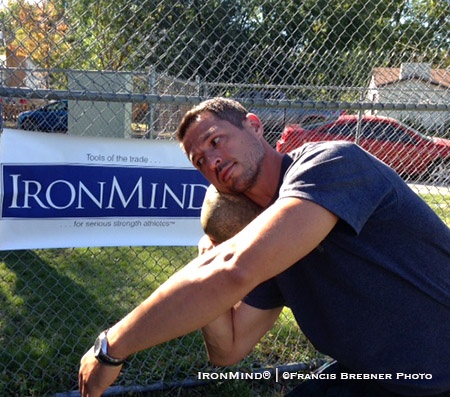 The skirmish continued in 28-lb. weight for distance, with Middleton jumping from fourth place to first in the final round with a distance of 64’ 7”. Second was Dumitrica with 63’ 6” and inches behind was Beech in third with 63’ 4-1/2”.

Dumitrica, after four events and mistakes, was in the driver’s seat with 6 points, with nearest rivals Beech and Anselmi at 12 points.
In the 16-lb. hammer, it was another ding-dong battle with only inches separating the top two and with less than 9” separating the next three places. Middleton snatched the win over Beech in the last round with 107’ 5” to Beech’s second at 107’ 4-1/2”. Third was Lomsdalen at 103’ 7-1/2”.

After six events, Dumitrica was leading by only 1/2 point over Beech. It was all down to who wanted it most and would not make any mistakes.

In the 42-lb. weight-over-bar, Farr, Riess, and Dumitrica cleared 17’, with both Dumitrica and Riess clearing 17’ 5” to set personal bests—and with Riess under 190 lb., the throw set a new world record in that class. Only Riess cleared the bar at 18’, and this for another world record. It was a disappointment for Beech as he need to stay close to Dumitrica to stand any chance for the overall win, but he had to settle for a five-way tie at 15’.

For Dumitrica, it was a well-earned Lightweight World Championships victory; he placed consistently throughout the competition, vital for winning the title.

On behalf of the IHGF, acknowledgement goes to Polly Mae Saulls and Will Griffith for all their hard work and dedication to making theses IHGF/SAAA Lightweight World Championships the best to date. No stone was left unturned in Saulls’s preparations in making these games the success they were and it is just amazing what she has achieved in three years in building Mountain Home into a major games on the national circuit. A total of 84 athletes competed between the A, B and C classes, Men’s Lightweight, Women’s Open and Lightweights, and Women’s and Men’s Master classes as well as the Girls’ & Boys’ Junior classes. Eight strength athletes competed in a strongman competition, bringing the total number of athletes to just over 90. Special mention must be made to the mayor of Mountain Home, Rich Sykes, who not only got behind the promotion of the games, but also took part in the Master’s class and placed third overall.