Time was when virtually all top Olympic-style weightlifters did split snatches and split cleans: think names like Waldemar Bazanowski and Yuri Vlasov, and iconic images of deep splits, massive weights and dazzling athleticism come to mind. 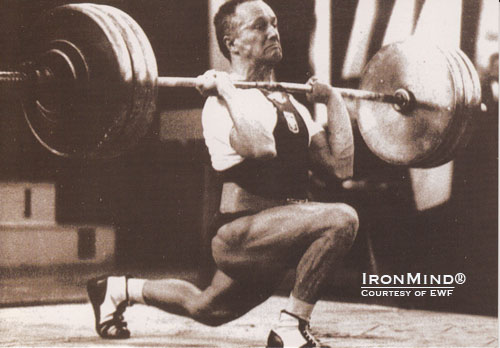 Waldemar Baszanowski, a master of the split style, was an Olympic champion, a world champion and a world record holder.  IronMind® | Photo courtesy of the EWF.


Starting in the 1960s, the squat style of snatching and cleaning became increasingly common among the world’s top weightlifters—largely relegating the split style to masters’ contests and occasionally used by others as well.

The split style has much to recommend it, not the least of which is that it is more forgiving of different body types and, hence, can be a lot easier on your joints.  Plus, it’s quite a feeling to flash under a bar with one foot going forward, the other backward, with great transfer to a lot of other sports.  The split style can be a door opener for CrossFitters, military, public safety and law enforcement officers who want the benefit of doing snatches and clean and jerks, but who might not well suited to using the squat style in the receiving position.

Three-time USA Olympic Weightlifting Team coach Jim Schmitz talks the split style this month—something he both teaches and practices himself, so if you want to give this a try, read on, get to the gym and give this a try.

From the IronMind homepage, go to the Training Articles button and follow the menu or click here to go directly to Split Lifting Technique.