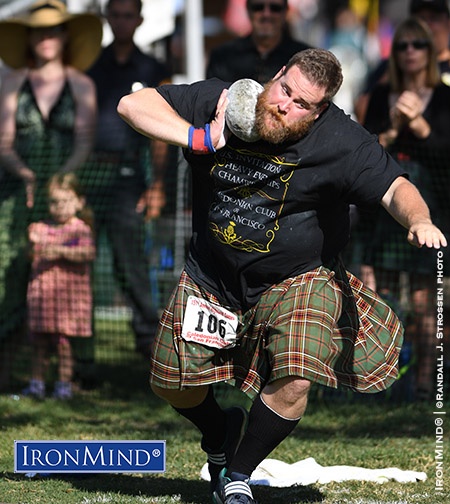 Spencer Tyler opened the second day of the 2016 US Invitational Heavy Events Championships with a convincing win in the open stone, on his way to claiming the overall title. IronMind® | ©Randall J. Strossen photo

Spencer Tyler wasted no time in his debut in Pleasanton: the Highland Games athlete took the 2016 US Invitational Heavy Events Title by a wide margin, with Dan McKim coming in second and Matt Vincent third.

McKim, going for his sixth consecutive win at Pleasanton, was now on 18 points to Tyler’s 13 as they headed into the last event, the 28-lb. weight-for-distance.

Tyler definitively secured his win with a first-place 92’ 1”, which was a new field record, and McKim was third at 83’ 9.5”—with Matt Vincent separating them in second at 85’ 2”.   Top three were Tyler at 14, McKim at 21 and Matt Vincent at 34—and a nice wrap-up for Tyler, who distinguished himself among the world’s best.

As always, surrounded by palm trees, rolling brown hills, and blue skies, the U.S. Invitational at Pleasanton runs like clockwork in the capable hands of athletic director Steve Conway and his team of volunteers, including firm-but-fair judge Laurie Moore.