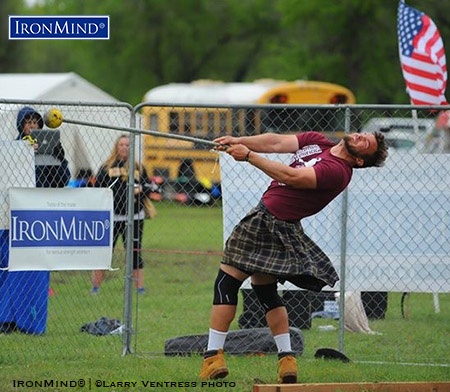 Standout performances on both hammers contributed to Skylar Arneson’s victory at the Great Plains Renaissance Festival & Highland Games, which qualified him for the IHGF All-American Championships. IronMind® | Photo courtesy of Larry Ventress

Proving himself to be a rising star in the Highland Games heavy events, Skylar Arneson turned in an impressive performance as he won in Wichita and qualified for the IHGF All-American Championships.

Arneson, who comes from a track and field background, looked on fire in his warm-ups with the 22-lb. Braemar stone, and from the first round, he unleashed an incredible series throws, finishing with a PR 41’ 2” for the win and setting a new ground record. Second place was a close tussle, with Anthony prevailing over Johnson at 36’ 6” to 35’ 11”.

After a noble series of throws with the 56-lb. weight for distance, Arneson took his third victory at 39’ 11”. Heaton and Anthony were separated by just inches for second at 36’ 3” and third 36’ respectively.

Anthony pulled off the win in the 28-lb. weight for distance with a throw of 68’. Arneson fouled his first two throws but he took his final attempt carefully to land a throw of 67’ for second place. Johnson was third at 66’ 5”.

In the 16-lb. hammer, Arneson produced an amazing series of world-class throws all over 130' and on extra attempts, he came close to the amateur world record, currently at 145’ 4”, with his distance of 142’ 4”, yet another PR and new field record. Johnson also came up with a fine series of throws for second, ending at a PR 130’ 8’. Third was Anthony with 114’ 1”.

Arneson lobbed the 22-lb. hammer a record 109’ 8”, setting his fourth ground record of the competition and his fourth PR of the day. Johnson followed with another PR 105’ 4” and Anthony took third at 93’ 8”.

Arneson dominated the 56-lb. weight-over-bar at a winning height of 17’. He attempted the amateur world record at 18’ 2” but fell short. Second was a tie between Anthony and Heaton at 15’.

After the first leg of the IHGF All-American series, first and second place Arneson and Anthony qualified to go to the 2017 IHGF All-American Championships, which will also be hosted by the Great Plains Renaissance Festival in late September.

A great standard of throwing was enjoyed in all categories, and rising star Arneson, at only 24 years old, has a promising future in Highland Games, and I predict he may be the next to smash the amateur world record in the 16-lb. hammer, if not both hammers. Athletic director

Dave Glasgow was pleased to have the high caliber of throwers in Wichita, with thanks going to Richard Cathy, the director of the Great Plains Renaissance Festival, for hosting the first leg in the series and this year’s finals.

The next qualifying games in the IHGF All-American series is the Las Vegas Highland Games, 29–30 April 2017.