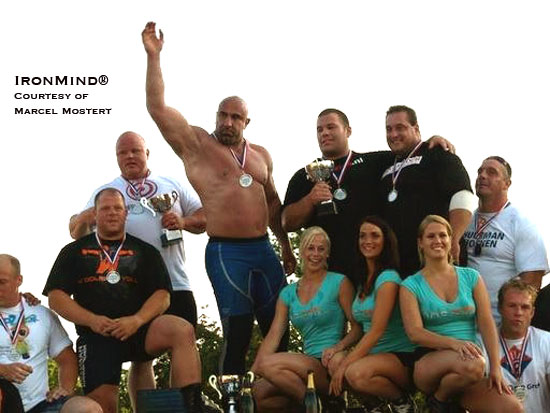 “I am happy Simon [Sulaiman] took this title,” Marcel Mostert said.  “He competes already 9 nine years in Dutch strongman, so he deserved it!”  IronMind® | Courtesy of Marcel Mostert.


The Dutch National Championships in strongman enjoyed “a good athmosphere with sunny weather and 4,000 visitors,” Mostert reported to IronMind®.   “We had a great, exciting match on Saturday, July 11.”  Changing the field, Jarno Hams was out due his recent injury, and  since Harms has “taken the Dutch title for the past 5 years in a row, Simon Sulaiman had a big chance to win his first Dutch Championship ever,” Mostert said.  “But it was not an easy job.

“There was a field of 12 finalists, who came out of 4 qualifiers earlier in the year.  More than 100 athletes had fought this year to come into this finals.  In the finals, there where a few strong newcomers, who are promising for the future.”

After winning the first event, the Medley, Sulaiman then stood in second or third place for the rest of the contest, Mostert said.  “Four times there was another leader, so it was very exiting and [the competitors were] close to each other!  In the very last event, the Power Stairs, Simon attacked and won the Power Stairs (blocks of 175, 225, 275 kg).  He beat Alex Moonen, until then in first place overall, and took the title: Dutch Strongest Man 2009 in the last seconds,” said Mostert.