Making the Red Nail Roster™ means that Richard Bean has achieved what he describes as being, “a major goal of mine since I first bent my very first ‘nail’ or piece of steel.” 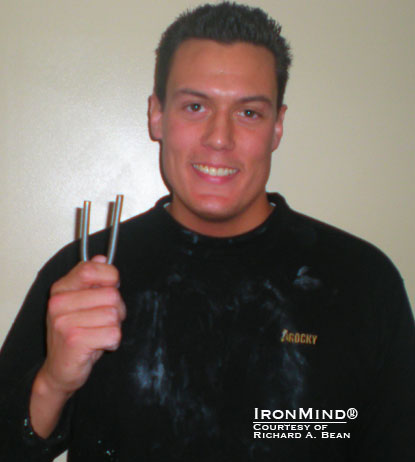 “I prefer to utilize a ‘Double Overhand’ style to bend as I feel the most comfortable and strongest in this style,” Richard Bean told IronMind.  Bean has just been certified on the IronMind Red Nail.  IronMind® | Courtesy of Richard A. Bean.

As worthy as this accomplishment is, don’t think Bean sees this being an absolute terminal point.

“The Red Nail Roster™ in my opinion symbolizes your achievement in reaching world class status in steel bending, but it does not necessarily end here.  There is always something bigger in diameter, shorter in length, or less wraps or different styles to utilize.”

Congratulations, Richard, it’s official: you have been certified and your name has been added to the Red Nail Roster™; and many thanks to John Doyle for serving as Richard’s official referee.