Shane Hamman, who recently retired from weightlifting, is working full time as a national spokesman for Rachel's Challenge, a group dedicated to bringing positive change to high schools by altering how students treat each other. 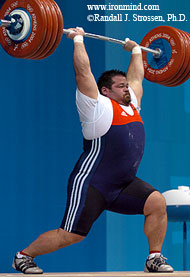 Shane Hamman rewrote the record book at the Athens Olympics, as this 237.5-kg clean and jerk broke the American records in the clean and jerk, and in the total (Athens). IronMind® | Randall J. Strossen, Ph.D. photo.

Shane Hamman owns all three American weightlifting records in the super heavyweight class, and before he moved over to weightlifting, he was a very successful powerlifter: Hamman still holds the IPF super heavyweight world record in the squat, at 457.5 kg (about 1009 pounds), done back in 1996. Hamman said that he made the transition because weightlifting offered him the opportunity to go to the Olympics - something he could never do as a powerlifter or a strongman. "Just being an Olympian is awesome," said Hamman. "It was the highlight of everything for me."

Hamman realized his dream, competing in two Olympics, and at the Athens Olympics in 2004, he broke the American records in the clean and jerk, and in the total, with 237.5 kg and 430 kg, respectively.

Rachel Scott died in the Columbine High School tragedy, but her acts of kindness became the foundation for this life-changing school program which, "inspires, instructs and enables students to bring positive change" to their school. For more information on Rachel's Challenge, please check the Rachel's Challenge official web site.