Wes Barnett was the last American to medal at the men's World Weightlifting Championships, but Shane Hamman can do it next year. 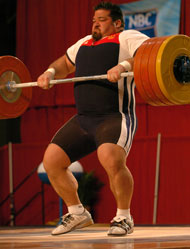 Shane Hamman hit a PR 237.5-kg clean and jerk in Athens, lifting it like it was a warm-up weight. IronMind® | Randall J. Strossen, Ph.D. photo.

Anyone who was lucky enough to be there for Hamman's 197.5-kg snatch at the 2002 World Weightlifting Championships (Warsaw, Poland), or his 237.5-kg clean and jerk at the 2004 Olympics (Athens, Greece), knows that both lifts had plenty of extra steam on them - Shane Hamman has not yet done his maximum in either the snatch or the clean and jerk, and with just a small bump up from his current PRs, and a couple of breaks, he is genuinely capable of medaling at next year's World Weightlifting Championships.

While those medals won't be awarded until next year, the process of winning (or losing) them has already begun, so if you want to see some 2005 World Weightlifting Championships medals coming back through US Customs, support Shane Hamman right now: Nobody can train for Hamman, but everyone can support him, urge him on and let him know they believe in him. We do.