Just returning from the Ukraine, where the final leg of the 2011 Giants Live season took place, Colin Bryce filed this report with IronMind on the strongman competition that delivered the final invitations to the 2011 MET-Rx World’s Strongest Man contest. 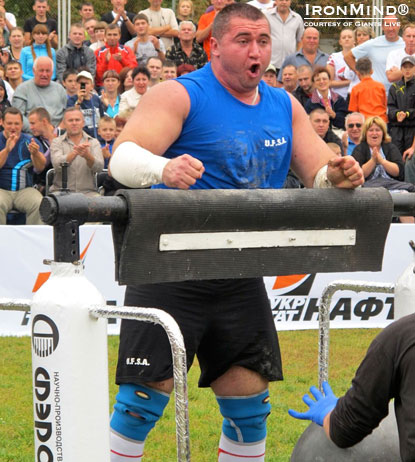 Sergii Romanchuk finished second in the Atlas Stone for reps and first overall at Giants Live–Ukraine.  Giants Live is the official qualifying tour of the World’s Strongest Man contest and this was the final contest in its 2011 season.  IronMind® | Courtesy of Colin Bryce.

The final Giants Live battle was in Poltava, Ukraine this past Tuesday and Wednesday, August 23rd and 24th.

Originally, Giants Live was going to do four shows this year: Istanbul, the Excel Arena in London, the Power Park in Finland and Stroze in Poland. However, with the world standard being as it is it was deemed absolutely necessary by both WSM and Giants Live to make the final few men fight it out in one extra contest. This was seen as a much better option than than let it be done on wildcard entrants. So, "Let the sport decide" was agreed by all.

With this tension in mind It was to be a particularly atmospheric couple of days.  This was added to as Ukraine was proudly enjoying a celebration for its 20th Anniversary as a democratic state.   The legendary organising pair of Vlad and Olena Kiba staged not just one show, but three to commemorate the national holiday.  World’s Strongest Lady and a massive fight between the Ukraine and USA Under 105 kg went down successfully as well.

The Giants Live events in Poltava were extremely tough for a contest just three weeks before the final.  This just may have put a couple of athletes off coming.  A lost passport, a missed flight and a complete no-show by another athlete were all part of the story–finally nine men took to the field.

The first event was a sledge pull done on a ladder:The weight was almost 1 tonne and the distance was a mere 10 m.   Only 3 men finished a sickeningly-tough pull.  Mark Felix of the Uk was last with barely a few metres.  It was Sergii Romanchuk of Ukraine who dominated to take first place.  This set up a great possibility of a 'comeback' story all day for the veteran Felix.

Event two was the Frame Carry at 370 kg for 40 m.  Felix, shouting at himself in anger, came out and nailed it.  He was only one of two men to finish it–the other being the newly crowned South Africa's Strongest Man, Gerrit Van Staden.  Still, the difference between the two men was an astonishing 32 seconds.  Felix was looking super-hungry.

Event three was the Conan's Circle, and Paul Pirjol, the little 20-year old Romanian smoked it.  An easy win for him on a 380-kg weight. J osh Thigpen was second and mused that it was perhaps 220+ kg in the arms.  Felix came third.

Event four was the Giants Dumbell at 95 kg for 60 seconds.  Pirjol again should have won, howowever, an amateur slip-up with one rep got it disallowed.  The young Romanian already had a direct invite to WSM after winning Romania's Strongest Man, so he was just here for the pleasure of a big contest; and that it was.  Some 10,000 people across two days came to the event.  They enjoyed almost 7 hours a day of strongman and light entertainment.  Pirjol shared the win with Alex Bershuck of Ukraine and Alex Lysenko, a mighty new Russian.

Therefore, going into the final event, Felix was just two points behind Romanchuk.  However, a 380-kg squat machine awaited them.  Big squats are what Romanchuk loves; but the question was would anyone manage it after the first five men failed it entirely!  In the end, Thigpen did five, Felix did four and Romanchuk cruised to any easy 7 for the win in the squat and the win overall.  Pirjol failed it entirely and allowed the American, Thigpen, to leapfrog ahead of him into third spot.  This was very significant as the top 3 were guaranteed a World’s Strongest Man slot.

Officially, the final results were: