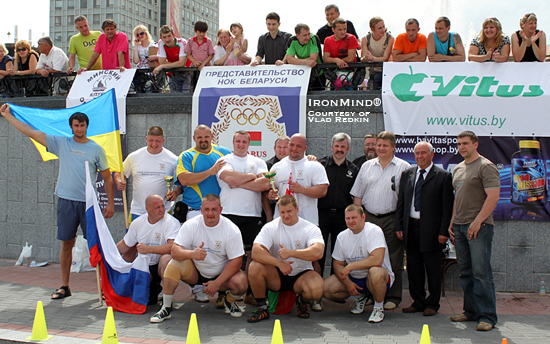 Athletes, organizers and such dignitaries as Olympic weightlifting champion Leonid Taranenko gather for a group photo at the first stage of the 2010 Belarus Strongman Cup.  IronMind® | Photo courtesy of Vlad Redkin.


Held in Minsk, Belarus this past weekend, this contest featured “new names and young athletes,” Redkin told IronMind®.  “We are planning to prepare a strong Belarus team in the final.  All our projects in Belarus were and will be filmed,” Redkin said.  “Strongman sport in Belarus is supporting by the Belarusian Olympic Committee.  We have many possibilities for progress in development in Belarus.”

Also playing a major role in this contest was Vasyl Virastyuk, the Ukrainian strongman who was the first man to win both the IFSA world championships and the World’s Strongest Man contest.

Asked about the international scope of this competition, Vlad Redkin told IronMind® that Vasyl Virastyuk said, “We will cooperate in organization Belarus-Ukraine competitions in both countries,” so the expectation is for increased collaboration in the future.

Here are the top five, officially: