With most of the top competitors on hand, the Sacramento Highland Games with the 2008 and 2010 world champions taking first and second place, respectively. 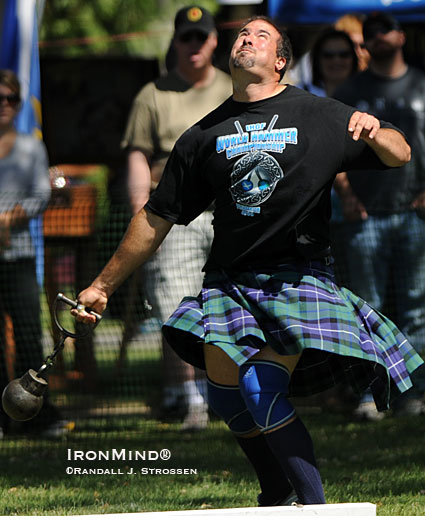 The last event, the 56-lb. weight over the bar, was rather interesting as those using the traditional standing style of throwing and the spinners vied for the win.  Brock clinched first place on countback at 17’ using the spinning method; Betz took second at 17’ in the traditional style; and McKim was third at 16’, also standing.

Steve Conway, who was officiating the event, felt it was a very good competition overall.  He noted that Brock gave his all during the course of the competition despite suffering from a shoulder injury which will require surgery once again in a few months and unfortunately will put him out of commission for a while.  Conway also said that Price had really taken his throwing to a new level, particularly his weight for distance throwing and hammers, and he was looking forward to seeing how Price progressed over the season:  his stone putting was at his best, and with his extra attempts on the 16-lb. open stone, Price produced a put of 56’ 2”, which looked effortless.