Sean Betz is continuing to show good form early in the 2011 Highland Games season and the 2008 world champion, added another victory to his collection when he won in Victoria, British Columbia last weekend. 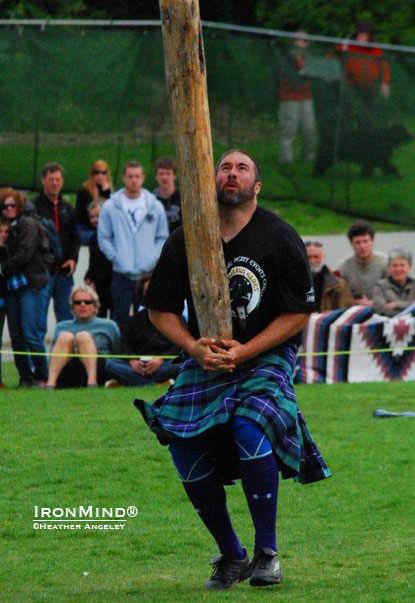 Sean Betz didn’t win the caber, but he won just about everything else, including the overall title, at the 146th Victoria Highland Games.  IronMind® | Heather Ancelet photo.

Betz was on form throughout the weekend, managing a clean sweep of all the events except for two, with Canadian Doherty also putting in a solid performance throughout.

The 56-lb. weight over the bar was done in the traditional style and was won by Betz with a world-class height of 16’.  Doherty took second at 15’ and Hadley third at 14’.

The concluding event of the first day was the caber toss, which was 20’ in length and weighed 148 lb. This big stick proved no problem for Vierra, who slammed home the winning toss of 11:50.  Hadley followed in second with a toss of 10:55, and Brock landed in third place with an 87-degree attempt.