Edging out Craig Sinclair by one point, Scott Rider maintained his momentum as he won the Aboyne Highland Games this past weekend, with Francis Brebner calling the action for IronMind. 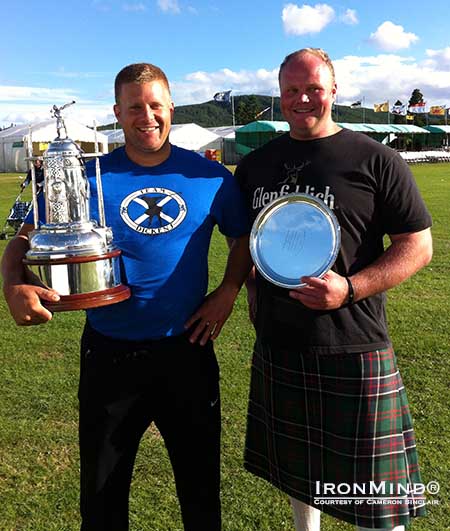 Scott Rider (l.) with the Dinnie Challenge Trophy for the most points, and Craig Sinclair (r.) with the Dan Findlay Memorial Trophy for winning the 56-lb. weight-over-bar.  Photo by Cameron Sinclair.

With sunny skies and a stiff breeze, the athletes put up a top performance, with the main duo, Scotland’s Craig Sinclair and England’s Scott Rider, dueling for the title and producing some excellent all-round throwing.

After four events C. Sinclair and Rider were tied on points, each garnering two wins.  They battled heartily in the 28-lb. weight-for-distance, with Rider taking the win at 82’ 3”.  C. Sinclair was second at 81’ and Patience third at 77’ 3 1/2”.

Going into the final event, the weight-over-bar, Rider was in the lead by two points—but that did not deter C. Sinclair from giving his all and pulling out a personal best 16’ for the win.  Rider was second at 15’ 6” and third equal were Robb and Patience at 15’.