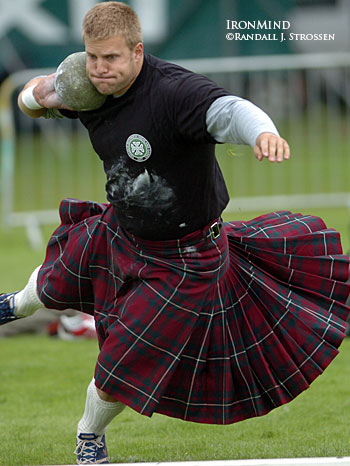 Scott Rider on his way to winning the 16-pound stone at the 2007 Highland Games World Championships (Inverness, Scotland). IronMind® | Randall J. Strossen, Ph.D. photo. The Londoner just added to his considerable laurels with a historic win at Braemar this weekend.

'Not since the might of Geoff Capes, three-time Olympic shot putter, has any Englishmen won the title at Braemar," Bryce said. "To look back farther than that for English greatness at Braemar you have to go to the European shot put champion of 1958, Arthur Rowe, who managed to beat the great Bill Anderson, MBE in the 1960s to take the title for the first time back down across the border. For the ranks of Englishmen there have been no other recorded successes at Braemar right back to the early 19th Century.

"This very famous event on the Scottish calendar is where the birth of the modern Highland Games is accredited to and since the 1840s it has been the focus of the royal family's summer holiday.

"Perhaps it was rather fitting therefore that it was under both the watchful eyes of Bill Anderson, chief referee, and the Queen that the title was again taken back to England by Scott Rider. To do it, he had to pull out an incredible final round throw in the last event, the Braemar stone, to win the overall contest by just half a point ahead of Scotsman Bruce Robb, with Bruce Aitken again just a further half point back in third place.

"Rounding out the top five was Chiprunin in fourth place and American Jim Parman, respectively. Sadly, for the recently crowned world champion, Gregor Edmunds, gaining a second Braemar title was soon ruled out in the pre-event training as he badly strained his back and decided to only take part in the caber.

"It was an all around tremendous day for Rider who has only turned his attentions to the Highland Games in the last two years, and the big question now is will his success in the Highland Games drag him away from the full time circuit of amateur athletics and the lure of another Olympic Games in bobsleighing?

"Quite probably yes, as when asked that very question he said, 'There is little better feeling than taking part in such a wonderful traditional sport. Most of the athletes there had the capability of winning the title but it was just my day.' Highland Games fans had best keep one eye out for this superb all around talent." 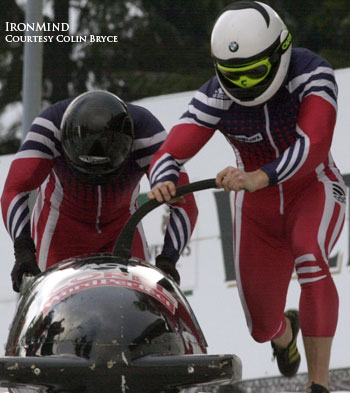 Scott Rider (front) and Colin Bryce on their way to the fastest push title at the 2004 British Championships. IronMind® | Photo courtesy of Colin Bryce. 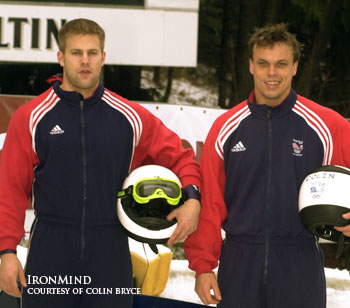