Pasadena, California - The strongman contest at the FitExpo begins today and rumors are flying that Brian Schoonveld is ready to attack the world record in the IronMind® Apollon's Axle™, a signature event in the strongman world. 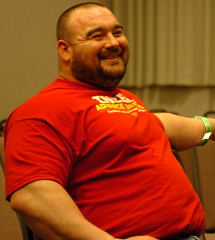 Schoonie is weighing around 360 pounds, looking strong and feeling confident. There is talk that his first attempt on the Apollon's Axle™ might be at or above the world record, which is currently held by Hugo Girard and stands at 175 kg (385 pounds).