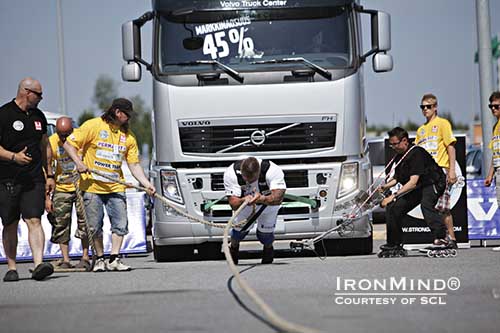 Strongman Champions League (SCL) is introducing a new competition format in its Truck Pull World Championships, with elimination rounds cutting the field until only the finalists remain.  IronMind® | Photo courtesy of SCL


“The competition is done by harness and rope system, using IronMind harnesses. The location is the Power Truck Festival—the biggest truck festival in Scandinavia, gathering around 30.000 people each year.

“SCL has been part of their show now already for the third year in a row. This tells how well big and powerful trucks and strongmen fits well in same show.

“The system in Truck Pull World Championships that we use is knockout: After the first round, the three worst times will drop out. The second round we have two groups. Each group’s best time pulls against the worst time and so on. After these we have four athletes left. From these four 2 best times goes to the final. So in a Final we have two athletes left. In Final top 2 will have two pulls.

"The results can been seen first here on ironmind.com," Kinnunen said.