The lucky 13th stage of the MHP Strongman Champions league was held in Gibraltar last weekend: Zydrunas Savickas edged out Krzyszstof Radzikowski by one point for the victory, but Radzikowski retained his 2013 MHP SCL Leader’s shirt as the series heads towards its finale in November. 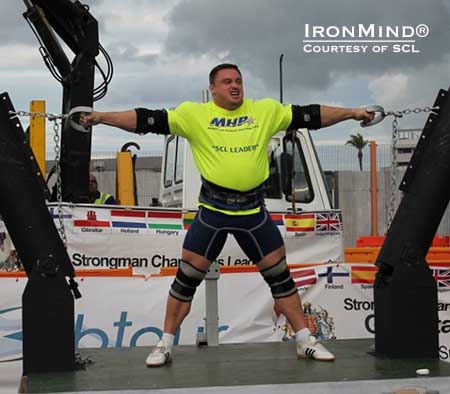 
“It was very exciting and Krzysztof pushed the big Z to his limits, as they were both at equal points going into the last event, the Atlas Stones,” Marcel Mostert reported to IronMind.

“Krzysztof was the fastest in the stones with only Zydrunas to go.  Zydrunas appeared to be in his best shape for this and won the event, which gave him the overall title—winner of the MHP Strongman Champions League Gibraltar 2013.

“A big battle between the third and fourth place was also exciting: Alex Moonen from Holland almost made his first SCL podium as he finished with the same points as Dainis Zageris from Latvia.  However, Dainis had two second places and Alex only one, so Alex had to be satisfied with fourth place on countback.

“Terry Hollands had to stop after the first event as a back injury still bothers him a lot.  He will be back maybe next year!?
“Local hero Daniel Gracia from Gibraltar finished 10th place, but he was content with that in this strong field.

“The next stage will be the MHP Strongman Champions League Lithuania, combined with the World Log lifting Championships, broadcast live on Eurosport, October 19–20,” said Mostert.

For trailers and a complete ranking list, please check www.strongmancl.com .