“With one stage to go, SCL Slovakia this coming weekend in Kosice, we are making us up forthe semi-finals of the Strongman Champions League in Canada at 29 September,” SCL cofounder Marcel Mostert told IronMind today.

Top international strongman competition is returning to Canada:  SCL–Canada will present the 2011 season semi finals along with amateur strongman and a range of entertainment in a four-day series across New Brunswick, Canada.  IronMind® | Courtesy of SCL.


SCL–Canada is presenting the season semi finals in a package of big-name strongman competitors drawn from around the world, with a multi-stage format all backed up by an entertainment package including music, dance and medieval combat.

“In total, four days of competition, with 10 events and an impressive list of 16 competitors out of 13 different countries will compete for the US$35,000 prize money and double points in the SCL ranking,” Mostert said.

“Also, the top three of this competition will have a direct place into the finals on December 17 in the Ukraine.”

Here are the events by day and location:


“It will be a heavy fight for SCL points, prize money and the title for the first SCL CANADA ever,” said Mostert, “and with the solid organization in Canada, professional referees and helpers with more than 20 years strongman experience in this show, it guarantees to be a great event.

To strongman fans everywhere Mostert said: “We welcome you to the 10 th stage of the Strongman Champions League 2011!”

For tickets and full details, please visit the official website. 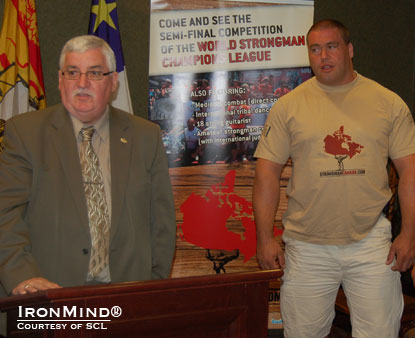