Zydrunas Savickas flexed his muscles on Day 3 of Strongman Champions League–Canada and he moved up from fourth place to take the lead after three days of competition. 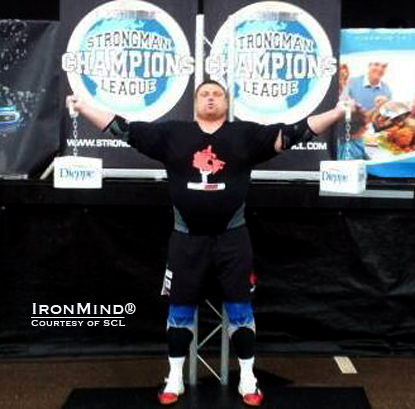 Zydrunas Savickas put his shoulders to work on the Crucifix at SCL Canada.  IronMind® | Courtesy of SCL.


“Unfortunately, all day rain in Canada,” reported Marcel Mostert last night, “so we skipped the Wheel Flip [and moved it to tomorrow] out of safety reasons and did two events in full rain.    “It ended in two wins for Zydrunas, which brings him in the lead: He won the Wheelbarrow (450 kg in hands) over 17 meters in 10.95 sec.  Few athletes could finish it, so it was heavy.

“On day 4 [today], we will do Farmer’s Walk, Wheel Flip  and Atlas Stones, and finally crown the winner of the Monster Milk Strongman Champions League–Canada with a $10,000 cash prize .

Here are the official scores after three days of competition at SCL-Canada:

Watch Twitter and the IronMind News for updates and the final results.