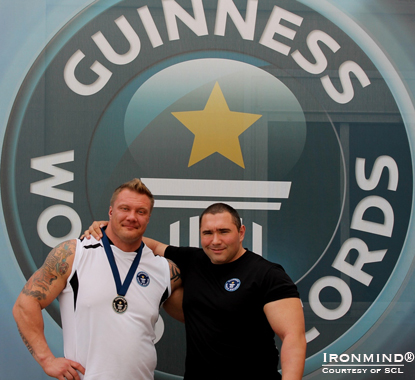 
“It was a great start of the spring 2012 as today Tomi Lotta had a battle against Akos Nagy for breaking as many baseball bats as possible!  Tomi won this with 16 in one minute and got a new Guinness World record.  Akos did 11 bats.

“Also, Kristin Rhodes won a Guinness record by flipping a huge Fingal Finger of 100 Kg four times in a minute.  Jolanta Logina from Latvia did also four flips, but her time was just little slower.

“Last week, Zydrunas [Savickas] tried to break the fastest farmer’s walk record from Laurence Shahlaei (set in China, December 2011) , but he didn t succeed.  He was 0.80 slower than the current record.
“Nina Geria from Ukraine broke the Guinness weight for height beer barrel record with 3.90 meters clean over the bar,” said Mostert.

“It’s a real great cooperation between Guinness records and Strongman Champions League all over the world,” said Tomi Lotta, “and it gives so many possibilities for strongmen and female athletes to show their skills on a strength exercise.  We have a great 4 star hotel in Rome and all is well paid.  All records are done within ideas from SCL and Guinnness records.”

Next week is a new show, in what will be the fourth of eight episodes, and Mostert said “We will see  new strongwomen Nina Jumppanen from Finland,  Kathleen Krausse from Germany and Nina Geria from Ukraine in the Duckwalk!

“And a week after that, Aneta Florcyck from Poland and Anki Oberg from Sweden will go for a new Guinness Wheelbarrow record!”

Keep your eye on the IronMind News and the SCL website—more is on the way. 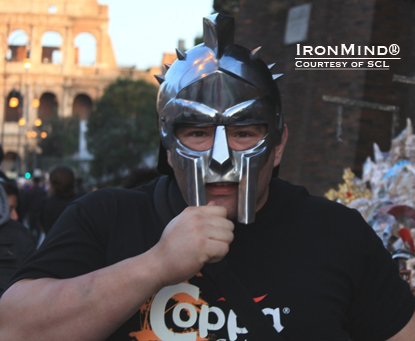 They have the biggest competition calendar in strongman and SCL can also boast about its locations: in Lapland a couple of weeks ago and now they’re in Rome.  Akos Nagy looks like he’s ready to step into the Colosseum (background).  IronMind® | Photo courtesy of SCL.