At the SCITEC European Strongest Team Challenge, which was held in Cakovec, Croatia this past weekend, more than two thousand spectators turn out to watch eight teams from across Europe do battle in five grueling events, promoter Adam Darazs reported to IronMind, and Team Poland was on top of their game as they claimed first place in nearly every event. 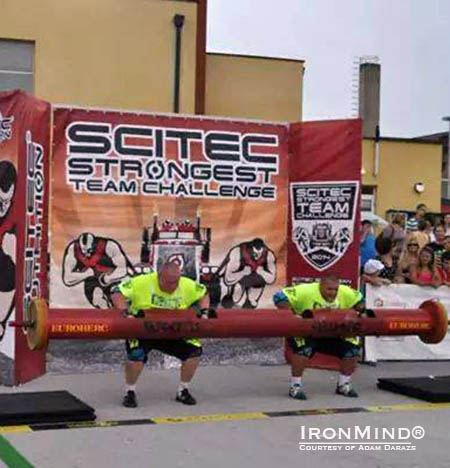 The challenge started with the two-man harness 17-ton truck pull over a 20-m course in the fastest time.  It ended in a tight finish, with team Poland winning by tenths of a second at 20.38 seconds over second-place team Ukraine at 21.00 seconds, followed by teams Germany (21.22 seconds) and Denmark (21.94 seconds).

In the log lift for reps, athletes had 75 seconds to complete as many reps as possible with the 240-kg log.  Teams Denmark, Poland and Ukraine had a three-way tie, pumping out 7 reps each.

An individual event for only one team member, the Icelandic Cross, weighed 130 kg and was carried for max distance in a time of 75 seconds.  Team Croatia won with a carry of 42.01 m; close behind was team Hungary at 41.75 m, and tying for third were teams Poland and Ukraine at 40 m.

In the individual deadlift for reps, athletes chose between 310 kg or 340 kg with a time limit of 75 seconds to complete as many reps as possible.  Team Poland pulled off the victory with 340 kg for 7 reps, with team Denmark following at 6 reps and team Germany at 3 reps.

The final event, the frame carry, weighed a colossal 500 kg and had to be carried over a course of 40 m in the fastest time.  Team Poland took first with a speedy time of 19.31 seconds over team Denmark at 21.56 seconds and team Ukraine at 22.03 seconds.

Promoter Adam Darazs said he was very happy with the overall show and looks forward to the next contest in the SCITEC Strongest Team Challenge series, which will take place in Ukraine on August 23–24.  The finals will be held at the Arnold Europe, Madrid on September 26, all of which will be filmed for European TV.