Ryan Vierra, the five-time World Highland Games champion, arrived in Aberdeen, Scotland yesterday in preparation for the Royal Braemar Highland Games this weekend, which�will be attended by Her Majesty the Queen, Francis Brebner told IronMind®, as he filed the following report. 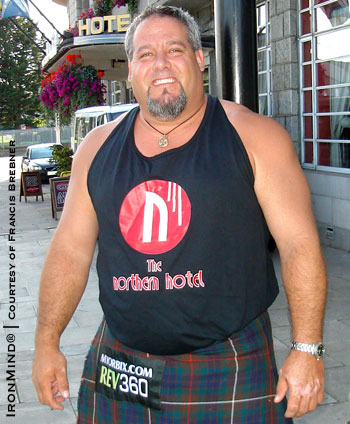 Ryan Vierra spoke to the press this morning outside the Northern Hotel in Aberdeen, Scotland. Vierra will be throwing at the Braemar Highland Games this weekend, with Her Majesty the Queen in attendance. IronMind® | Photo courtesy of Francis Brebner.


Ryan, whose trip is sponsored by the Aberdeen Northern Hotel, said he was very grateful once again for such sponsorship by Gary Cox and to be back in Scotland.

Ryan attended a press call this morning at the Northern Hotel where he was interviewed by the Aberdeen newspaper The Press and Journal as a buildup for the Games.  Asking him how he was feeling, Ryan said this will be a first for him, competing at famous Royal Braemar Gathering: "I am really fired up for the whole event and this is probably the first time I have been since the World Championships, which was held earlier in the year.

"Competing this past weekend at the Pleasanton Highland Games was a very moving experience for me and is something I will always remember, being presented with the Chief's Trophy, which was kept a well-hidden secret until the final closing ceremony in front of a crowd of 30,000 spectators.  I was very moved, indeed.  I believe it was the first time in 143 years that such a presentation has been made to a heavy events athlete.  The Pleasanton Games for me is probably one of the best Games I have competed in, very well run by international judge Steve Conway, and it always has a lineup of top world-class athletes competing, which makes the Games that much more special." 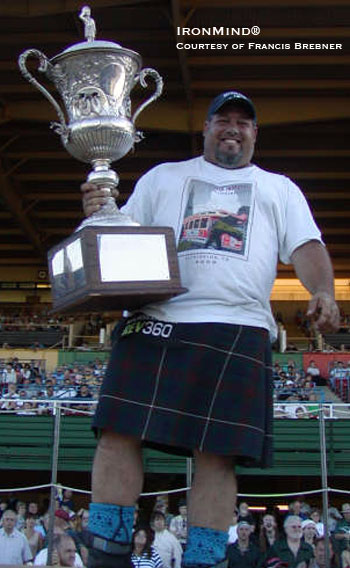 Ryan Vierra was honored at the Pleasanton Highland Games last weekend with the Chief's Trophy - if Ryan were not as strong as he is, he'd never be able to make this massive trophy look so light. IronMind® | Photo courtesy of Francis Brebner.