Rusty Price had a big day at the Vista Highland Games over the weekend - winning decisively - and Highland Games ace reporter Francis Brebner was on the field. 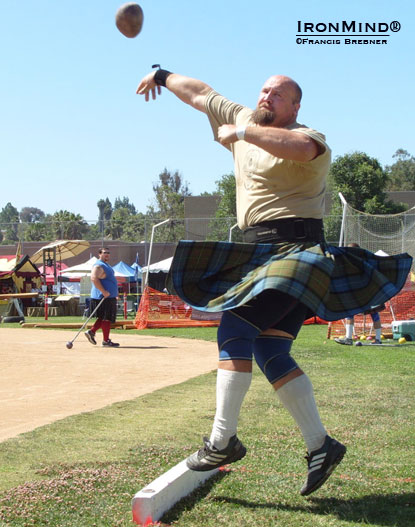 Rusty Price is on a roll—throwing big at the Vista Highland Games and on his way to Scotland with Ryan Vierra.  IronMind® | Francis Brebner photo.

It was a smashing weekend at the Vista Highland Games in Southern California for Californian Rusty Price who practically had a clean sweep in all events and established five new ground records.

This weekend’s Highland Games was probably one of the best overall performances I have seen in a while by any one athlete in a while, and Rusty this season is improving dramatically from games to games and has his sights clearly fixed on being a future contender in the IHGF World Championships.

In the opening event, with the 22-lb. Braemar stone, it was Rusty Price who was clearly in a league all of his own winning easily with a put of 43’ 3” and he established his first ground record of the day.  His nearest rival was Ryan Vierra, with a second-place put of 37’ 7-3/4”.  Chad Gustin took third place, close on Vierra’s heels, with a put of 37’ 5-1/2”.

The 28-lb. weight for distance witnessed Rusty Price produce his third win of the competition and also another ground record with a world class throw of 86’ 1”; in second was Vierra with 83 ’3” and Gutsin was third with 77’ 4-1/2”.

Moving onto the 56-lb. weight over the bar, a lot of eyes were set on Big Dan Williams to claim the win after recently breaking the world record in this event for spinning with the 56-lb. weight over the bar but it was not to be this weekend as Price took yet another victory with a winning height of 17’.  In second place, it was Gustin with 16’ and Williams in third place on count back with 16’ also.

Rusty Price now heads to Scotland for a two month stint of the Scottish Highland Games circuit with his teammate and coach Ryan Vierra.

Asking Rusty Price what he is most looking forward to with this being his first trip to Scotland competing he said, “I am looking forward to experiencing the culture and history of Scotland and the Scottish games firsthand and of course meeting and competing against Scotland’s best athletes such as Bruce Robb, Bruce Aitken, Craig Sinclair and Gregor Edmunds.”

Also a special mention to Vern Alexander who broke his own world record in the 28-lb. weight for distance in the 70-plus masters category with a throw of 45 '1", smashing his previous record set earlier this year at the Queen Mary Highland games held at 44' 11-1/2”.