Sitting in the pit at the IRONMAN Pro means that you are rubbing elbows with some of the biggest names in bodybuilding - kind of unusual if you are used to covering weightlifting at the Olympics and the world championships in a handful of strength sports, but haven't been to a bodybuilding contest in about 15 years. 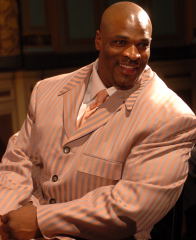 That's all Ronnie in the understated suit. You think this guy's not strong? Read on. IronMind® | Randall J. Strossen, Ph.D. photo.

Sitting next to me was none other than Ronnie Coleman and two things were immediately obvious even to someone whose knowledge of competitive bodybuilding stops somewhere around Sergio, Arnold and Franco: First of all, Ronnie Coleman is not as big as everyone says he is - he is even bigger. Second, don't believe what you hear about him being very nice and friendly - he is extremely nice and friendly.

This unlikely set of circumstances will probably bring a smile to Bob Bollenbach's face because there was no holding me back: "Ronnie, have you have ever tried one of these" I asked, pulling out not just a No. 3 Captains of Crush® gripper, but the exact 2004 No. 3 Captains of Crush® gripper that Clay Edgin had not been able to fully close at the last year's AOBS dinner, but that he then dusted at Steve Belanger's Grip Gathering in December. Clay had closed the gripper again at the Fit Expo, and a couple of other guys - including strongman competitor Corey St. Clair and newly-certified Captain of Crush Jeff Cagle - had given it a shot.

Ronnie Coleman, even if you're not a bodybuilding fan, is a regular source of huge lifts and there are gushing stories about his strength, so I figured why not have him try this benchmark test of grip strength.

Really impressive, to say the least.