When we introduced the Rolling Thunder® in the 1993 IronMind® catalog, we asked the question: "How can something a mere 2-3/8" in diameter cause the knees to shake in so many really strong men" 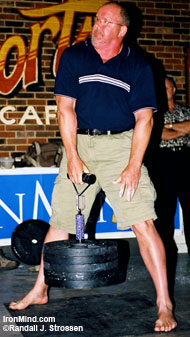 And we began to ask whether there was anyone on the planet who could lift three hundred pounds on the benchmark feat of hand strength.

True, it doesn't hurt to have a large hand on this or any other thick-handled feat of grip strength, but the advantage of the Rolling Thunder® is that technique really goes out the window - you grab the handle, squeeze, and if you are strong enough, you lift it. And if don't, you might get an idea of where its name came from.

Three hundred pounds has yet to be approached in a witnessed lift as the world record stands at 267 pounds, and despite some talk along the way, other than Magnus Samuelsson, IronMind® doesn't know anyone who could realistically threaten it on a consistent basis. Now, however, this record might be in jeopardy, because two different people told IronMind® today that they are capable of breaking this record and might aim to do it at the big grip reunion being hosted by Richard Sorin at his facility in Irmo, South Carolina on June 24, an event that appears likely to rock the grip world in more ways than one as it will feature not only Richard Sorin, the first man certified on the No. 3 Captains of Crush® Gripper, and a pile of other grip luminaries, but also a grip contest for everyone inclined to show that their hand strength is at least equal to their typing skills.

And now, if you needed one more reason to be there, we're hearing that the prestigious Rolling Thunder® world record might be in the cross hairs.