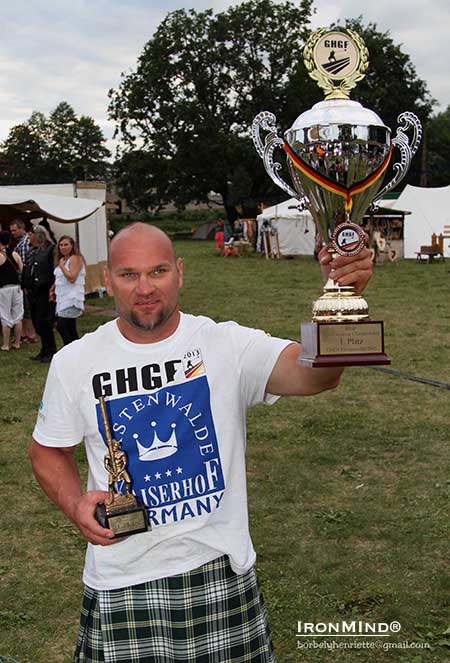 The 22-lb. Braemar stone put was a very close competition between Szabo and Van De Walle, with Szabo clinching the win in the final round with a putt of 38’ 6”.  Van De Walle took second at 37’ 9” and Schiller came in third at 35’ 4”.

Halfway through the competition Van De Walle and Fazekas were tied at 46 points, with third place Dorow at 43.5 and fourth place Szabo at 43.

With only two events left, the athletes went into overdrive.  A lot of pressure was staring to bubble and Fazekas nearly exited the weight-over-bar at 14’ with two misses, but he cleared it on his last attempt to stay in the competition.  The event was finally won by Fazekas at a height of 15’ 3”, with Bouma placing second at 14’ 9”; third place was a tie between Szabo and Vortriede at 14’ 3”.

The IHGF would like to thank Hans Dieter Dorow, president of the GHGF, along with Daniel Dorow, for their exceptional work in putting on a great show, which ran like clockwork, and for looking after the athletes in a first-class way.  The setting for the games was fantastic, giving an authentic feel and a magical atmosphere to the Highland Games.  The championships were filmed for European TV and will be aired later in the year.