Among the pre-dinner activities at the 2004 AOBS gathering was a bunch of hardcore grip guys testing themselves in a variety of ways, and one of the center stage performances was Richard Sorin attacking a pile of 10-pound plates with a variety of different pinch grips. 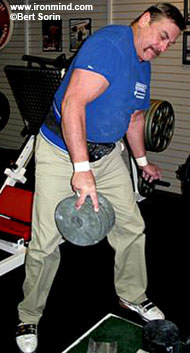 Those plates weren't the only thing Richard rattled, but who knew what was coming down the pike.

"After several months of skin-splitting practice, last night I did two full pulls (one held for over 10 seconds while we called Bert out of his office) with thumb and ONE finger with the same 5 plates you saw me and others try at the AOBS dinner," Richard Sorin told IronMind® today.

"I am very pleased and proud of doing this since for quite a while I doubted the possibility of making it at all."

Richard Sorin, the first man certified on the No. 3 Captains of Crush® Gripper, inspired countless other guys to attack grippers with a vengeance, but as well known as he was for his trail-blazing performances on the benchmark No. 3 Captains of Crush® Gripper, IronMind® has long pointed out that Richard Sorin's pinch gripping performances were just as otherworldly, and based on what Richard's been doing lately, for all he's already accomplished, it looks as if the best is yet to come.