Goyang, Korea - The stage was set for something big in the men’s 77-kg category at the World Weightlifting Championships: a hometown Olympic champion up against the top guns from China. 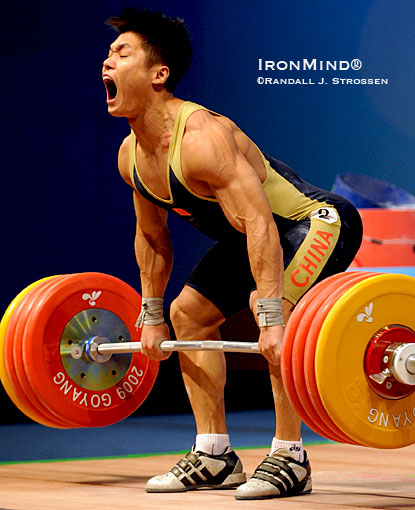 With two world records already in his pocket, Lu Xiaojun starts 211 kg on its way in the 77-kg category at the World Weightlifting Championships.  IronMind® | Randall J. Strossen photo.

And that’s without even considering an Armenian who was ready to seize any opportunity to move into a podium position.

The powerhouse Chinese Weightlifting Association had not only lost the gold medal at the Beijing Olympics in this category, but they had lost it on bodyweight and the man who walked away as the 77-kg Olympic champion was Korea’s Sa Jae-Hyouk.  To meet the challenge, the big guns had been rolled in from China - the top two competitors from the recent Chinese National Championships, Su Dajin and Lu Xiaojun, were on hand to deliver the goods.  The man who’d left Beijing with the silver medal, Li Hongli, had finished third in the Chinese National Championships, so he was not a member of this world championship team.

With a B session that sported two Russian competitors, the bar was set high in the 77-kg category.  So high, in fact, that Lu Xiaogun won the snatch with a world record lift of 174 kg.  Tigran Martirosyan (Armenia) was second, at 170 kg, and the other Chinese competitor, Su Dajin, was third, at 165 kg.  Sa Jae-Hyouk was fifth, having made 160 kg and then missing 165 kg twice.

So with one world record already put in the books, the clean and jerk promised to shake things up further, and once again, Lu Xiaojun did not disappoint as his 204-kg second attempt in the clean and jerk was good for a new world record in the total at 378 kg.  Sa Jae-Hyouk punched up 205 kg on his opener and then Su Dajin missed the same weight twice.  Martirosyan also missed 205 on his third attempt.

The niceties taken care of, it was time to put some more weight on the bar and Lu Xiaojun called for 211 kg, looking for a world record in the jerk and another one in the total.  A strong clean was followed by him having to dump the bar after he’d stood up - he was blacking out and indicated to the coaches as he left the platform that the bar had hit his windpipe.

Sa Ja-Hyouk cleaned the weight easily, again, on his third attempt, punched it overhead and appeared to have a good lift, only to have it turned down two-to-one, truly a close miss, and although faced with a great disappointment, the civil Korean crowd, instead of hurling verbal abuse or worse in the direction of the referees, accepted the decision with gracious stoicism.  After all, they probably said in consolation, their man was still the 2008 Olympic gold medalist.

Incidentally, in the training hall earlier today, Saeid Ali-Hosseini, the Iranian super heavyweight, snatched 200 kg in a most commanding style, hinting at what might happen when the +105-kg category takes its turn at bat.