Santo Domingo - Talk about lift and run: Israel Rubio (Venezuela) lifted in the B session of the men's 62-kg category and by the time the A-session was done snatching, his 133-kg was good for the bronze medal, but he was already on his way home. 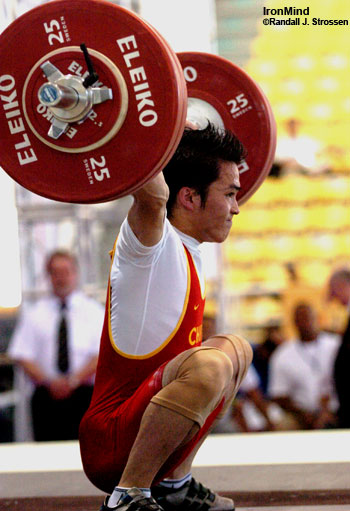 Based on openers, it looked like one-two for the Chinese lifters, but Zhang Ping didn't have the horsepower today to get 138 up and locked out, although he came the closest on his third attempt. His teammate Qiu Le nailed 138 on his opener, didn't get 140 high enough on his second attempt, but then he stuck it on his third attempt. Oscar Figueroa (Columbia), who was very popular with the crowd, had made very nice lifts with 132 and 137, and with the last attempt of the class, he took 141 in a bid for the gold medal in the snatch - it just wasn't there today, though.

If the snatches were off the world record level, the gap was even more apparent in the clean and jerks. Zhang continued down the path he had followed in the snatch, missing all three clean and jerks, but he received a nice ovation and he handled his zero-for-six day with admirable grace. When everyone else was done, Qui took his first clean and jerk, 168 kg, and made a nice lift. When he jumped 10 kg on his second attempt, suddenly it appeared that the class would produce a high-level lift, but he missed the jerk, and when he took the same weight on his third attempt, he cleaned the weight, but then dumped the bar.