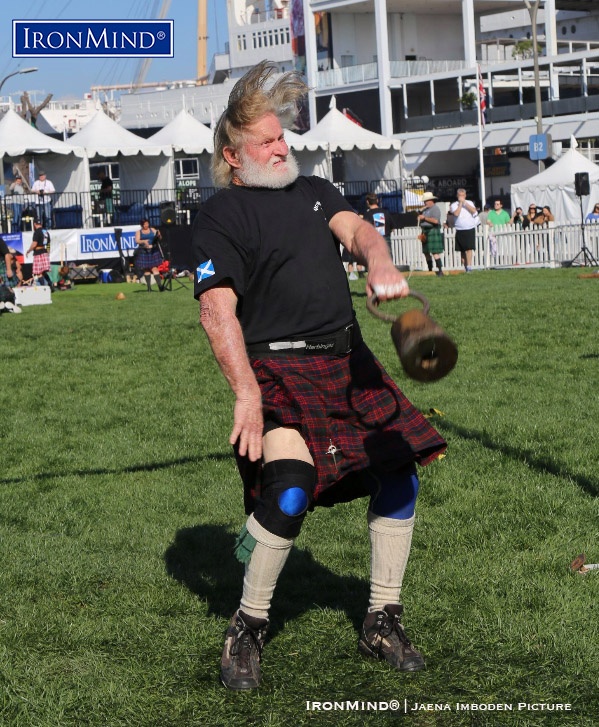 Building on it tradition of more than a quarter of a century of excellence, the 2020 edition of the Queen Mary International Highland Games was the stage for the IHGF’s opening gala.

The Queen Mary International Highland Games celebrated its 27th anniversary in Long Beach, California over two days of traditional Scottish festivities, with more than 15,000 spectators attending and over 120 athletes going head-to-head in heated competition. The Queen Mary Highland Games was the first of ten qualifying games for both the men’s and women’s A groups and men’s and woman’s masters 40 and 50 groups in the IHGF All-American Highland Games series; it also featured the championships of IHGF All-American Light Weight for Distance.

Men’s Pro Class
The pro class of top athletes across the USA included Kyle Lillie, Nathan Burchett, Isaac Burchett, Eddie Brown, Colin Dunbar, John Anthony, Gary Randolph, and Matthew Hand.
Competition got underway with the 26-lb. Braemar stone, in which Lillie took the lead and dominated the event with a winning putt of 44’ 1/2”. Second place was close with Brown landing a putt of 40’ 3” and Dunbar just 2” behind at 40’ 1”.

In the 20-lb. sheaf over bar, Lillie looked powerful, the only athlete who sent it sailing over 34’, for the win. A second-place tie at 27’ went to I. Burchett on countback over Randolph.

Dunbar won the 56-lb. weight over bar at 17’; a three-way tie at 16’ gave second place to Lillie on countback. I. Burchett was third.

The 28-lb weight for distance was a seesaw battle from the first round between Staggs and Lovotti, with Staggs snatching the win on his final attempt at 63’ 8-1/2” and taking the title of All-American Light Weight for Distance champion. Lovotti took second inches behind at 63’ 4”, and Perkins was third at 60’ 1/2”.

After four events, Mynarski had a marginal lead that was about to widen in the 16-lb. hammer. He produced a series of class throws from the opening round that could not be surpassed, nailing 113’ 5” for the victory. Staggs did 97’ 1” for second, and Lovotti did 95’ 11-1/2” for third.

The 56-lb. weight over bar ended in a tie at 13’, with Mynarski overcoming Lovotti on countback. Staggs was third at 12’.

The caber, which was 17’ 4” and 125-lb., proved a challenge, with the outcome determined on degrees. Mynarski pulled ahead for the win with a best of 75 degrees with Staggs second at 70 degrees. Perkins took third at 55 degrees.

In the 14-lb. weight for distance, Routt was pushed to the last round by McNamara, with Routt winning by a slight margin at 66’ 4” to McNamara’s 65’ 8” and earning the title of All-American Light Weight for Distance champion. Horner trailed in third at 58’ 1”.

The 28-lb. weight over bar ended in a tie at 13’ with the win going to McNamara on countback, leaving Barrio in second and Routt in third.

Routt regained her winning ways in the 10-lb. sheaf with a class height of 25’. McNamara bested Berrio on countback at 23’.

The 15’, 60-lb. caber proved a tough challenge and was determined on degrees, with Routt pulling a best of 85 degrees for the win. McNamara was second at 75 degrees and Berrio third with 65 degrees.

In the Men’s Masters 40–49 group, Jon O’Neil had a great competition, winning 8 of the 9 throwing events.

Richard Campbell was on form in the Men’s Masters 50–59 group and secured the overall win.

The Men’s Masters 60+ had a stacked field of masters’ world champions, and Mark Buchanan took the grand prize, winning 6 of 9 events.