“This spring we have started our activities,” Alex Glivinksi, vice president of the Professional Strongman League of Ukraine, told IronMind®’s Randall Strossen today, and the initial goal was to break some of the world records posted by the Strongman Champions League. 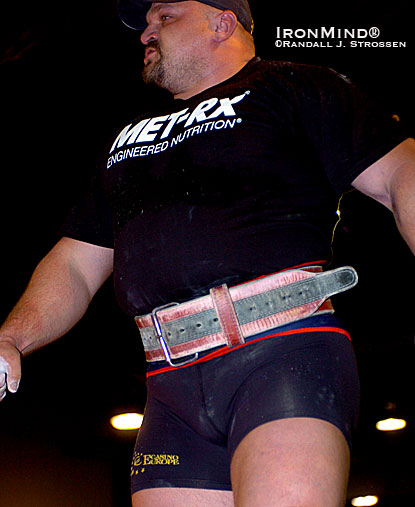 If you have a quibble, referee Vasyl Virastyuk—the first man to win both the IFSA world championship and the World’s Strongest Man contest—is available for a discussion.  IronMind® | Randall J. Strossen photo.


“So about the records,” said Alex Glivinksi, setting the stage for the Professional Strongman League of Ukraine’s gala event in 2010.  “As you know, strongman hasn't one international federation like it was before, so we try to beat records of our colleagues from other organizations like Strongman Champion League.  Vasyl Virastyuk as referee was responsible for conditions of the events and confirmed all weights and conditions.”  Following is Alex Glivinski's report.

They just came back after a tremendous performance in the tournament “Titan Beatle,” where Oleksandr Lashyn took first place, Victor Yurchenko became the vice-champion [runner-up], and for the team results (together with Volodymyr Muravlyov), Ukraine won against Russia, with the fifteen and a half points difference.  Athletes from the Professional Strongman League of Ukraine have set five world records.  Breaking the records took place during the Olympic martial arts, held on Saturday, April 17, in Kiev Palace of Sports.  The Champion's Cup, brought by the Ukrainian athletes from the capital of Russia, was shown to the audience during the participant presentation, and the public showed its appreciation with resounding applause for the achievements of the Ukrainian strongman team.

Ukrainian athletes have beaten the records announced by the Strongman Champions League as the world records.  Before the tournament, the referee—World’s Strongest Man winner Vasyl Virastyuk—confirmed the weights and conditions of the event.

In the very first event—a world record attempt in the shield carry—the referees, Virastyuk and World Cup winner in the Highland Games Kyrylo Chuprynin, recorded a new top performance.  Serhiy  Konyushok from Kiev surpassed the achievement of  Robert Szczepanski  from Poland, [a mark that had] been considered fantastic for a long time.  Back in 2006, in Quebec, Canada, the Polish strongman carried a shield weighing 182.5 kg for 100 meters.  The Ukrainian exceeded that distance by almost 21 meters: One may only scream, "Wow!"  Konyushok is in perfect shape, and now a new world record is 120 meters, 93 centimeters.

The audience was assured from the very beginning that not only Serhiy Konyushok was good shape because Oleksandr Lashyn and Volodymyr Muravlyov have beaten the 18 meters world record of Zydrunas Savickas from Lithuania in the farmer’s walk (2 x 181 kg) performed on the [Strongman] Champions League in France.  Lashyn carried this weight for 19 meters 80 centimeters, causing incredible public excitement.  But that same audience was surprised when Muravlyov gave a fantastic result in same event—22 meters 58 centimeters!   Muravlyov with his usual modesty said that he simply was trying to correct the bad impression of his performance last week in Moscow, where because of the food poisoning he only took 5th place.

The world record setting program was not finished at this stage, because Oleksandr Pekanov from Chernigiv has broken one more world record of  Zydrunas Savickas: in the deadlift he lifted 12 times 320 kg within the 60-second time limit.  Pekanov is the current world record holder in the maximum weight lifted: in 2008, at the  Arnold Classic, he recorded 471.5 kg.  Furthermore, it was Pekanov who was the first person on the planet, who raised the symbolic thousand pounds (454 kg).

In Kiev, Oleksandr Lashyn and Volodymyr Mylavlyov continued to impress the audience.  This time in the log lift, where the record belongs to Igor Pedan—9 repetitions with a weight of 125 kg (time limit: 75 seconds).  The first, as in the farmer's walk, was Lashyn and he set a new world achievement: 10 lifts!  Volodymyr Muravlyov performed the same exercise with the better time.  But muscle thigh cramping after 9th lift record didn’t let Myravlyov to make a new achievement.  Thus, Muravlyov repeated Pedan scores, but no longer in the status of a world record.

In addition, the Ukrainian set two national records: in the Conan's wheel, Viktor Yurchenko  has made 52.12 meters and Oleksandr Lashyn—in the first Ukrainian Rolling Thunder competition, did 97.5 kg.

The next tournament will be held on May 29 in Kalush near Ivano Frankivsk, where Professional Strongman League of Ukraine would select new athletes: 6 professional licenses to be granted, with the holders of which can compete with the pros.