Athens – Udomporn Polsak (Thailand) never left any doubt about being in charge of the women's 53-kg category today, and after she had won the Olympic gold medal, she broke the world record in the clean and jerk. 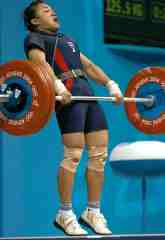 Leading Raema Lisa Rumbewas (Indonesia) 97.5 kg to 95 after the snatch, Polsak had the gold medal won with her second clean and jerk (122.5 kg), when Rumbewas missed 125 on her third attempt. Rather than passing on her third attempt, Polsak called for a world record in the clean and jerk (125.5 kg), and made a roaring success. Mabel Mosquera (Columbia) won the bronze (87.5/110), to the great delight of her teammates.