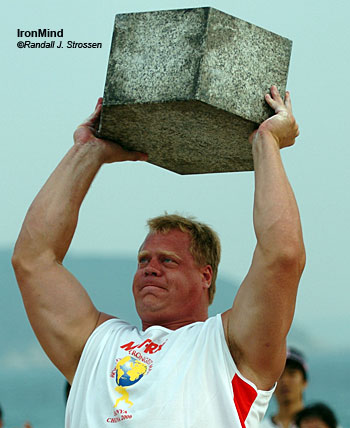 Pfister, whose unorthodox approach to strongman includes non-traditional training and a very limited competition schedule said that "two contests a year is plenty for me." Pfister explained that his formula of focusing on the Arnold and the World's Strongest Man contest is ideal, since, among other things, their timing gives him roughly half a year in between each for preparation.

"After five or six years of competing in six or eight contests a year," Pfister said he had to change things around because with that schedule, "it's hard to get stronger." Also, even though his considerations go beyond the short-term earnings, Pfister said that the number of pro-strongman contests in the US with decent prize lists has declined over the years . . . and he rattled off a more than a handful of promoters who used to put on contests like this, but who no longer do.

Pfister is still eying a victory at the Arnold strongman contest at some point down the road, but his real target is winning the World's Strongest Man contest . . . again. If you're going to focus on something, Pfister explained, "Why not concentrate on the one contest everybody knows about and watches."