He fills a doorway and charms the crowd - all the while, Phil Pfister, being a top strongman, proves that there are far fewer immovable objects on earth than most people would guess. 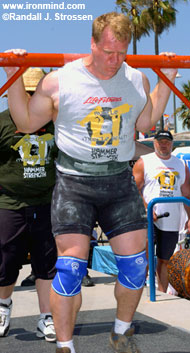 Phil Pfister on the Power Yoke at the 2004 Battle of Muscle Beach, where he gave 1335 pounds a ride. IronMind® | Randall J. Strossen photo.

Pfister competed in the first two Arnold strongman contests on less than two weeks' notice, and this year, it's the first time that he has had plenty of prep time for one of the heaviest and most visible contests on the strongman circuit.

Ever a crowd-pleaser, Pfister brought down the house at the inaugural Arnold strongman contest when there was a special event to see who could lift the replica Inch dumbbell the highest with one hand. While Mark Henry nearly cleaned the dumbbell, it was Pfister, combining strength with a sense of showmanship, who rang the bell: He lifted the Inch off the ground, knee-kicked it to his shoulder, and then he pressed it - producing near bedlam as the thousands of fans packing the Veteran's Memorial Hall became instant Pfister fans and nearly blew the roof of the building showing their appreciation of what he'd done.

Pfister, a firefighter from Charleston, West Virginia, has long been viewed as one of the Americans most likely to win the World's Strongest Man contest, and since he only competed in three contests last year, there is tremendous pent-up demand among strongman fans to see the Pfister perform at the Arnold in March.