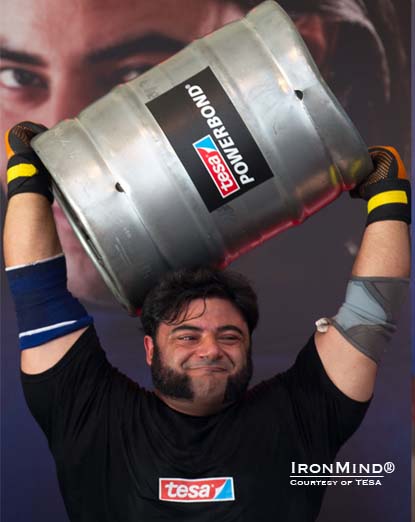 
“The contest was held in Hamburg, where Tesa Powerbond started its official promotional tour.  His third attempt was 159 kg, and he was very close to finishing it.

“Patrik is preparing now for German Championship in the Log Lift on the 15th of September and then he would like to compete in the worlds in log lift in Lithuania in October,” Ollesch said, and he’s coming off a third place finish in the recent Germany’s Strongest Man contest, which had “had a very tough final this year.”

Speaking of Germany’s Strongest Man, it was a seven-event contest and here’s how Ollesch summarized the action for IronMind:

• Car Deadlift with 320 kg for reps.  Patrik Baboumian won with 19 reps over Andreas Altmann with 18.

• Viking Press with 140 kg for reps.  Patrik Baboumian and Mateusz Sktentny tied for the win with 17 reps.

• Loading Medley with 100- and 110-kg beer keg and a 110-kg sack [sandbag] which had to be carried 10 m and then loaded on a truck, where they also had to load a 160-kg stone.  The fastest here was Timo Rüdiger, which gave him the overall win, with the exact same points as Mariusz Skrentny, who had one less win than Timo.

Patrik Baboumain, the reigning  champion, came third with one point behind the top two, losing the title on his last-place finish in the arm-over-arm event.  Oliver Nell won the class under 105-kg body weight class.