Francis Brebner continues his reports for IronMind on the Thunder From Down Under: The Waipu Highland Games were won by New Zealand’s Pat Hellier. 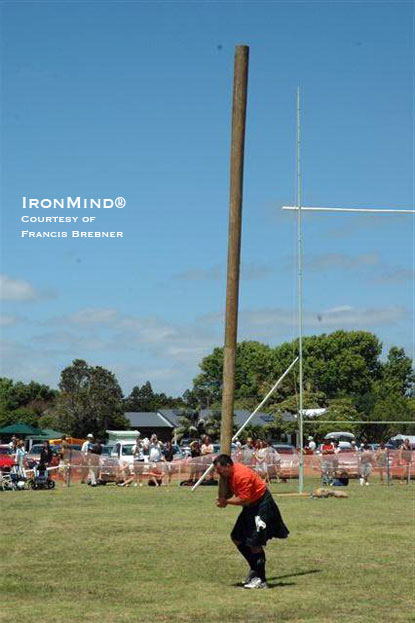 The Thunder From Down Under could be heard this weekend in both New Zealand and Australia as both Pat Hellier and Aaron Neighbour each battled it out on their homeland turf.

Pat Hellier, the greatest heavy events athlete ever to come out of New Zealand, once again reigned supreme, winning his 14th consecutive New Zealand Championships title, which has also secured his place in the lineup for this year’s IHGF World Heavy Events Championships in Victoria, British Columbia, Canada.

Don Ewan of the Waipu Games committee said, “This was our 18th year for hosting the New Zealand Heavy Weight Championships and our 139th year of consecutive Games here at Waipu.  This year we attracted one of our biggest crowds of more than eight thousand people for a one-day event.  The weather was fine and sunny with a light breeze from the southwest, which made it perfect throwing conditions for the athletes.

“This year we had a few events for women, which went down very well.  A new rising star on the horizon, Tina Hakeai, a 15-year-old schoolgirl, competed for the first time and dominated the women’s events.  She has the potential to eventually challenge the feats of Olympic champion Valerie Vila; already she put the shot 5 meters farther than Valerie did at the same age.”

Hellier, again in the 16-lb. hammer competition, kept up his good form, winning his third event with a throw of 122’ 5-3/4”, with Reid in second position once again with 111’ 8” and Mick Cottrell now making an appearance in the top three with a distance of 105’ 6”.

Going into the fourth event of the championships, the caber toss with a stick that weighed 130 lb. and was 20’ in length, only Hellier could manhandle this beast, tossing a winning 10:00.  This left the rest of the athletes to be judged on degrees, with Craig Read in second place with 85 degrees and Mick Cottrell in third with 80 degrees.

At this point in the competition, it looked as if it was going to be a clean sweep for Hellier. But in the sheaf toss, which is one of Hellier’s good events, a surprise occurred when Reid went ahead of Hellier with a winning toss of 32’ 8” for the win, with Hellier settling for second place with 29’ 5” and McFarlane in third place with 26’ 2”.

The following event with the 56-lb. weight for distance was a very close competition between McFarlane and Hellier, coming down to their last round.  McFarlane claimed his first victory over Hellier with a throw of 35’ 5-1/2”, with Hellier in second at 34’ 5-1/2” and Mick Cottrell just squeezing into third position at 28’ 7-1/4”.

In the 28-lb. weight for distance, the crowd witnessed another great fight to the finish between McFarlane and Hellier, with McFarlane coming out on top marginally over Hellier with a winning distance of 71’ 4-1/4” and Hellier in second place at 69’ 9”.  McLeod pulled up into third place with a distance of 63’ 7-3/4”.

In the final event of the championships with the 56-lb. weight for height, Hellier finished on a high, clearing 15’ for the win and the title of New Zealand champion once again.  In second place was Reid on countback with 14’ and Cottrell in third place, also with 14’.