Dongguang, China – Coming into the men’s 77-kg category in weightlifting at the Asian Games tonight, few would have picked Pang Kum Chol (North Korea) over Su Dajin (China), but those who did, and especially anyone who made a wager to that effect, left with a smile: Pang Kum Chol upset the former junior world champion with a gutsy performance. 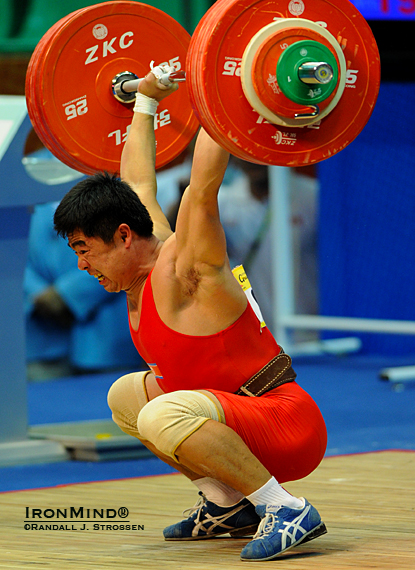 Would you believe that Pang Kum Chol (North Korea) saved this 192-kg jerk and that he had already won the gold medal in the 77-kg class at the Asian Games before taking this attempt?  IronMind® | Randall J. Strossen photo.


The standard of this class was not especially high as the highest snatch (158 kg by Su Dajin) was nearly 20 kg below the world record and only one other lifter got into the 150s, and that was Pang Kum Chol.

There were early warning signs suggesting that Su Dajin might be in for a rough night as he missed 158 kg quite badly on his opening snatch.  When he smoked it on his second attempt, it created a feeling that maybe the first attempt had been an aberration, but things kept unravelling for him when he appeared to have made 161 kg on his third attempt only to have it pop out as he was recovering.

Pang Kum Chol starts his snatches so slowly that you wonder whether he’s going to succeed in separating the bar from the platform, but he made 150 on his opener and then 156 on his second attempt, which put him in a two-horse race with Su Dajin.  Pang Kum Chol missed 159 kg on his third attempt, not quite hitting the height he needed to lock out the bar overhead.

Of the leading pair, Pang Kum Chol opened first in the clean and jerk, polishing off a solid clean with 185 kg with a squat jerk that he had to chase a couple of steps in order to control the barbell.  Su Dajin cleaned 190 kg on his opener and it looked as if he expected to power jerk it, but he was driven down into a full squat and lost the lift.  That was a harbinger of what the rest of his evening would be like as he came out for two nearly identical encores.

Pang Kum Chol had won the gold medal at this point, so nobody could fault him for not taking any more attempts, but to his credit he called for 192 kg on his second attempt and cleaning it with an effort that involved a 45-degree clockwise rotation, he got rocked back and forth at the bottom of his squat jerk as he adjusted and fought to save the lift—which he did.  Satisfied, the newest Asian Games champion, having more than proved his heart, called it a night and passed on his third attempt.