Chiang Mai, Thailand - Oxana Slovenko (Russia) took a shot at breaking her own world record in the snatch tonight with 124 kg on her third attempt in the women's 69-kg category at the World Weightlifting Championships tonight. 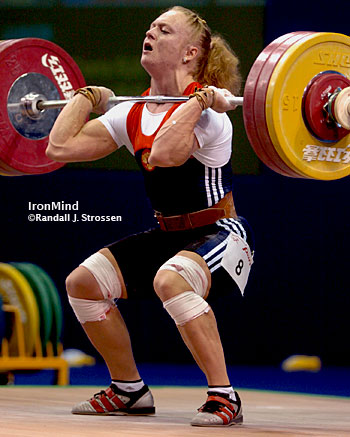 Oxana Slivenko (Russia) on her way up with 156 kg in the women's 69-kg category at the World Weightlifting Championships tonight. This clean and jerk, along with her 120-kg snatch, gave Slivenko a new world record in the total. IronMind® | Randall J. Strossen, Ph.D. photo.