“This week we have called off the World Championships for Matthias [Steiner],” Frank Mantek told IronMind® in a formal statement. 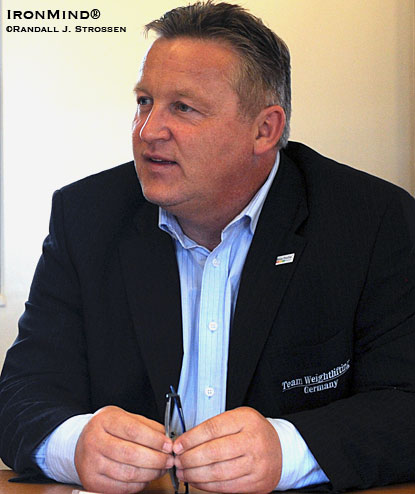 Frank Mantek, himself an Olympic medalist in weightlifting, is the Chief Weightlifting Coach for Germany.  IronMind® | Randall J. Strossen photo.


“There are three reasons for it,” Mantek said:

“1.  The time after his groin operation carried out in February has not been sufficient for a necessary World Championship form. The training remains by the long break after the Olympic Games till the end of 2008 and this unexpected operation have led to this fact. That's why we could begin only in May with the World Championship preparation.

“2.  After the Olympic Games in 2008, Matthias Steiner became a media darling in Germany. Honourings like the 'sportsman of the year,' the Saxon salary order (a very important honour in province Saxony of Germany), world weightlifter [of the year], Bambi prizewinner (the biggest German media prize) and countless TV appearances have made him a model and idol in Germany. He has underestimated this influence in the effect on his training certainly something. I am persuaded of the fact that the won experiences will help him in it for the next year again to find the right priorities for the return to the world class in our sport.

“3.  Also in his private sphere has done itself a lot. He has moved in the nice city of Heidelberg, a new girlfriend in the spring has expected a child from him. The whole family will move end this year to him after to Heidelberg. He has put on the market his biography as a book and is demanded in many areas personally.”

“A young person has travelled the last year as quite a normal sportsman to Peking to come true a dream. From 19.08.2008 thus about 20.30 o'clock his life has totally changed. He has become a man of the public interest and very much, a lot of people would like to have in it portion.  If we give to him the necessary time to ourselves again on the attack on the throne of the international weightlifting to prepare.  Besides, I will accompany him with my team, support and give enough time. Our sport has a ‘small star’ again who has also performed about the borders of our sport a lot for the respect of the weightlifting.  I think we are [fully prepared] in 2010 as I have already said it you in Bucharest [at the 2009 European Weightlifting Championships].  A really good superheavy can produce under our conditions all two years a top achievement. With Ronny Weller I have also trained, this was in 1996, in 1998 and 2000 just.”