London—On paper, it was going to be Akkaev vs. Klokov and then Aramnau was briefly in the picture too, but then first Aramnau and then the two Russians were out before it started—making it look like a shoo-in for Marcin Dolega—but after all the twists and turns, it was Oleksiy Torokhtiy (Ukraine) who stood at the top of the 105-kg podium in Olympic weightlifting tonight. 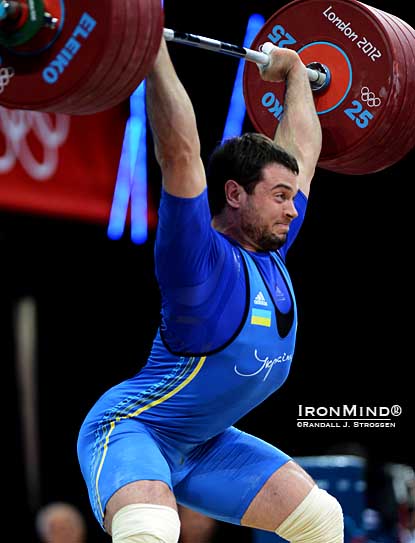 The door was opened for Oleksiy Torokhtiy (Ukraine) in the 105s and he walked in and seized the gold medal, clinching the deal with this third attempt 227-kg power jerk.  IronMind® | ©Randall J. Strossen photo.


With nine lifters in the A session, there were only 12 good snatches and, unfortunately, none of them belonged to Marcin Dolega (Poland), so he was out—not just the favorite at that point in the contest, he had said it would be his last competition and he was going all out because Poland gives a lifetime subsidy to all Olympic medalists and he wanted one.  Also bombing out in the snatch was Kim Whaseung (South Korea).

Fast forwarding in the clean and jerk, Bartlomiej Bonk (Poland) nailed three good snatches, ending with 190 kg, but only made one clean and jerk—220 kg—although that was good enough to leave him with the bronze medal.
Navab Nasirshelal (Iran) missed his first two snatches, made his third, and suddenly was in the hunt for a top medal when he opened with 222 kg in the clean and jerk and moved into the lead when he also succeeded with 227 kg on his second attempt.

Torokhtiy who had power jerked 222 kg inelegantly on his opener and then missed an equally ugly looking power jerk with 226 kg on his second attempt, called for 227 on his third attempt—he succeeded with his smoothest power jerk of the trio and that moved him from third to first, with only one attempt left in the contest.

Nasirshelal, looking to turn his silver medal into gold, took 229 kg on his third attempt, but he only deadlifted the weight.

Asked about Akkaev and Klokov, a Russian colleague told me that the word was that Klokov was positive, but that Akkaev really had been injured.  Regardless of what might have been, though, Oleksiy Torokhtiy seized the opportunity, lifted the weights he needed and now he’s the 2012 Olympic gold medalist in the 105-kg category.