Commenting on his WSF-Ukraine strongman contest, Vlad Redkin told IronMind, “The winner of the tournament was the strongest man Oleksandr Lashyn; he was able, despite hot weather, to gather strength and snatch victory from his rivals.” 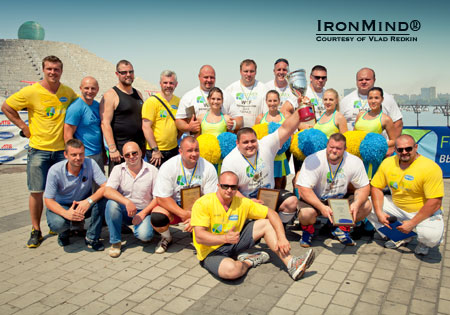 
Redkin said it was 44 degrees C [111 degrees F], and that there were over 1,000 spectators, along with “support for dance companies of the city and the sports club ‘Sunrise’ - all accompanied by athletes on the way to the podium.”

According to Redkin’s statement, “Vitaly Gerasimov, two-time WSM 105 kg  2009-2010, organizer of the event: ‘It was a great show, which was made possible by the general sponsor of the competition—the company FOREX TREND.  I've never seen so many representatives of the Ukrainian TV channels in the competition—it is said that the Federation Ukraine show strongmen master class! We - professionals in their field and together with the company FOREX TREND - we prove that Ukraine is the most powerful nation in the world.”

Although this doesn’t sound too much like MVM’s English, Redkin’s statement also attributes the following comments to “Magnus ver Magnusson - 4th time WSM: ‘I was struck by the hospitality of Dnipropetrovsk: posh reception of business hotel relax Good Zone, where I could admire plenty of Ukrainian landscapes and excellent service, and especially the elegant dinner in a restaurant, sports club," Voshod "on the banks of the Dnieper River. Strongmen met in traditional Ukrainian clothes with bread and salt. I'm not familiar with this tradition, but I really liked it.’ “

Here are the official final results: