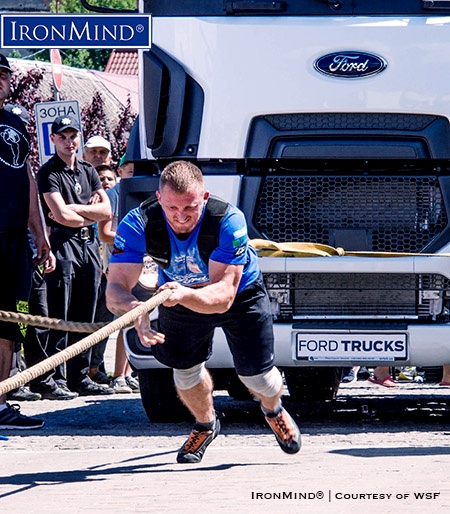 Ukrainian Oleksandr Kochergin won the WSF World Championship under 110kg in a very convincing style. The question about world crown was open until the final event!

However, in the third event of the Final – “Carry Medley” (2*100kg sandbags for 20 meters + 375 kg Super-Yoke for 20m) Kochergin with a result of 65,18 sec, having taken second place, won three points at once in the competition with  a main opponent! Haisha, who couldn`t reach the finish line because of back injury was fourth. Yuriy Ogonovskyi from Ukraine showed best result in this event – 55,84 seconds.

Before the final event – “Atlas Stones” (4 stones - 120,130,160,180 kg), the advantage of Oleksandr Kochergin in the overall score was 2 points, leaving the chance for Pavlo Haisha to make a comeback. But the confident victory in "Atlas  Stones" confirmed the legitimacy of Kochergin`s  claims for  the world title! Put all the stones on 1,45 m height platforms in 38 seconds, the strongman from Chernivtsi  has won the first world  gold in his carrier with a solid reserve! Pavlo Haisha finished second, Patryk Przybyla – third.

The large number of athletes who registered for the World Championship, the great interest of the public in the strength athletes competition and the picturesque nature of the Carpathians convinced the WSF and FSU that next year’s World Championship will take place in the same place – town Khust in  Carpathian Ruthenia. By the way, in 2019 it will be competitions in two categories – under 95 kg and under 110 kg!