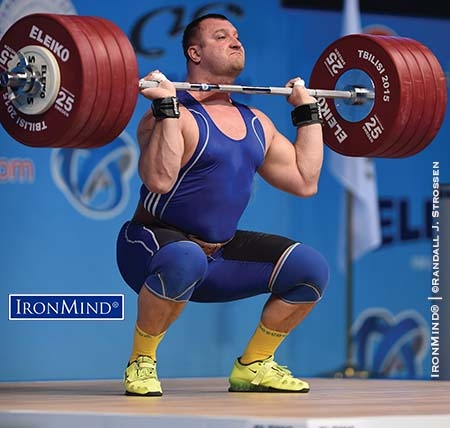 Tbilisi—Chingiz Mogushkov (Russia) missed 190 kg on his first attempt in the snatch and looked pretty disgusted about it, and confidently moved up to 194 on his second attempt.  Irakil Turmanidze (Georgia) opened with a crisp 192-kg success and so the stage was set in what was likely to be the battle for the gold medal in the snatch—Turnmandize was vocally supported by what was the largest live crowd drawn by the 2015 European Weightlifting Championships, while Mogushkov was acknowledged merely as a courtesy, it seemed.

Mogushkov smoked 194 kg on his second attempt, Turmanidze answered with 197 kg on his second attempt and then he uncorked a huge crowd pleaser when he hit 201 kg on his third attempt. The one remaining attempt belonged to Mogushkov, who nailed 202 kg, and to add insult to injury, he boasted of his supremacy by thrusting his index finger toward the crowd. The bronze medal in the snatch went to Oleg Proshak (Urkaine)—he ran through three good snatches, finishing with 200 kg.

Mogushkov had come out with a bow when he started the clean and jerks, but there was a feeling that the crowd would not be heartbroken if he missed his second attempt, 236 kg, and he obliged them: the cleaned the weight and made a weak attempt at jerking it, appearing to be passing out. He repeated but this time while he racked the bar, he couldn’t stand up with it, leaving him with the bronze medal in the total.