All Ford F-150 owners know that this workhorse truck can do just about whatever you ask of it and when Ford wanted a commercial that emphasized the F-150's superior payload, they took one look at Odd Haugen when he was competing at the FitExpo a few weeks ago and decided that he was the right guy for the job. 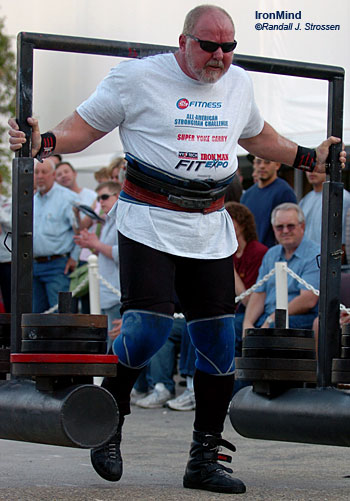 Trucking . . . Odd Haugen takes the Super Yoke for a ride at the All-American Strongman Challenge. Ford saw Odd and decided they had to have him for a commercial featuring their F-150 truck. IronMind® | Randall J. Strossen, Ph.D. photo.

Haugen told IronMind® that he wasn't sure when the commercial was set to air, but if you see a Ford F-150 commercial with a big guy pretending he's a forklift, you can say, "That's Odd . . . he made it look so light."