As if Oklahoma didn't have enough strong guys already, top American weightlifters Shane Hamman and Chad Vaughn are training together there now. 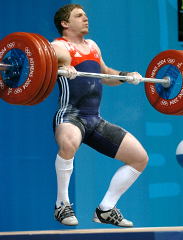 Chad Vaughn pulls himself under his 175-kg opening clean and jerk at the 2004 Olympics. IronMind® | Randall J. Strossen, Ph.D. photo.

Shane Hamman has been home since the Olympics and he said that he will stay there until early January, when he plans to return to the Olympic Training Center in Colorado Springs, Colorado. Hamman, who is within range of being a medal contender at the 2005 World Weightlifting Championships, said that he is hitting squats and the lifts for higher reps right now and is planning to reduce his bodyweight to about 150 kg.

And now that Shane Hamman is training with Chad Vaughn, two-thirds of the USA men's 2004 Olympic training team is in Oklahoma, a state with a long history of producing some of the top strength athletes around.

Hamman said that Chad Vaughn is moving up to the 85-kg bodyweight class, so I said, "Sounds like a 200-kg clean and jerk," and Hamman agreed.